Belstaff has been outfitting adventurous spirits since 1924. That’s nearly a century of heritage rooted in the north of England, in a company that started life by kitting out those as disparate as the famous aviator Amy Johnson, adventurer T.E. Lawrence and even revolutionary Che Guevara.

Ironically, although what they started all that time ago is now seen as uber-cool, (and what clothing manufacturer isn’t emulating them now with a waxed cotton garment of some kind?), for many the brand itself is associated with hunting and shooting, and with motorcycling in the era of reverse flat caps and weekend trials. And yet they’ve been at the forefront of the new boom in what is commonly known as adventure motorcycling. After all, they kitted out Ewan and Charley back in 2004 for their ‘Long Way Round’ and in 2007 they made the pair bespoke adventure suits for their ‘Long Way Down’ African ride.

Love ’em or loathe ’em they’ve opened the door to more riders getting involved in our ‘overland’ world than anything else. In 2020 Belstaff has returned as the outfitter to new Apple TV Original series, “Long Way Up.”

Premiering exclusively on Apple TV+ on September 18, “Long Way Up” follows McGregor and Boorman in search of a new challenge as they cross 16 borders, riding through Argentina, Chile, Bolivia, Peru, Ecuador and up through Colombia, Central America and Mexico on a pair of Harley Davidson LiveWire electric motorbikes. Directors David Alexanian and Russ Malkin captured the epic adventure, whilst following the bikes in prototype Rivian electric vehicles.

Ahead of the trip Belstaff worked with McGregor and Boorman to co-design the moto pieces worn throughout the journey. After exploring the brand’s nearly 100-year archive they co-created a collection that reflects their individual style and personalities, ensuring the moto range could stand up to the 13,000-mile journey through South America.

Ewan worked with Belstaff to co-design the McGregor Pro Jacket, a take on the brand’s iconic four pocket design that Belstaff is known for. The jacket features hardwearing and weather-resistant 12oz wax cotton fabric from Scottish mill Halley Stevenson, just 40 miles from where Ewan grew up. Inside there’s a McGregor tartan lining. The jacket is fully waterproof with sealed seams and a breathable membrane and there’s D3O vented armour at the elbow and shoulder.

But it’s TV so the wardrobe ws bigger than that of course. Charley wore the Gore-Tex equipped ‘Long Way Up’ Jacket and Trousers. Guaranteed to keep you dry, the suit features Superfabric at the shoulders, elbows and knees for extra protection, a fabric so durable its often worn by bomb disposal experts for safety. The jacket and trousers also feature D3O armoured protection.

As the journey took the team to a variety of climates, weatherproofing was essential, but so was adapting with an efficient ventilation system.

Belstaff say they are proud to provide the Long Way team with a collection that’s built for life on the road. IN total, with down jackets, jeans and other garments, the eighteen-piece collection is available from the 18th September in Belstaff stores, online and with select retail partners. 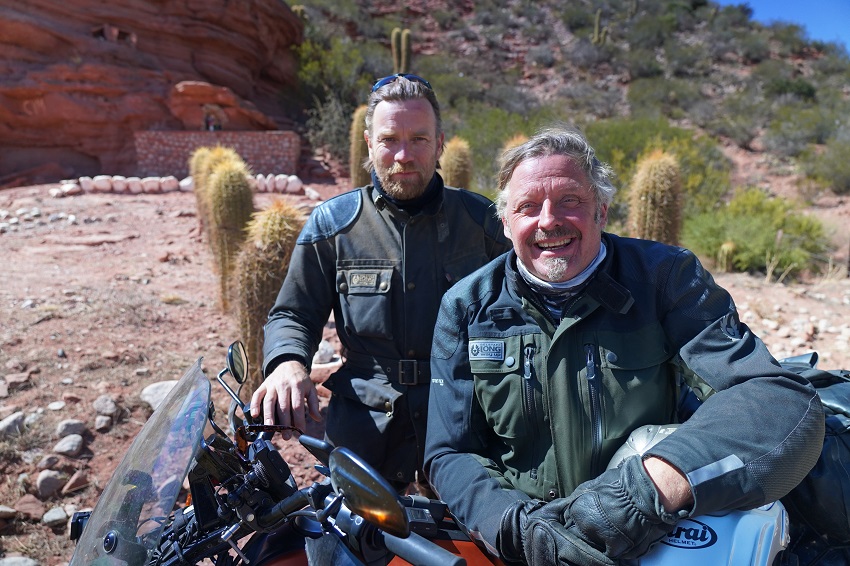